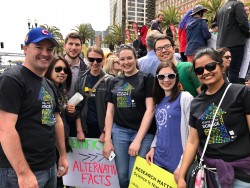 On Saturday, April 22, 2017, R. Sanders “Sandy” Williams, president of the Gladstone Institutes, spoke to a crowd of more than 400 people outside Genentech Hall on the University of California, San Francisco (UCSF) campus. Accompanied by UCSF Chancellor Sam Hawgood and other local leaders, Williams took part in “Stand Up for Science,” a rally co-hosted by Gladstone, UCSF, and the California Life Sciences Association (CLSA).

“There has never been a more important time for scientists to speak out with a clear message to the public and to our legislators about the value science brings to us as diverse individuals, as a nation, and as a global community,” said Williams in his speech. “Science is critical to overcome disease and to ensure a healthy future for us all. Science is critical for our economy and to ensure the prosperity of our nation.”

After the rally, many attendees, including members of the McDevitt lab and lab alumni joined the March for Science—San Francisco, where over 50,000 people from the Bay Area science community participated in the international movement to draw attention to the importance of their work.