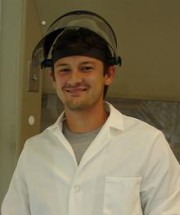 Andrés graduated with a Bachelor of Science in Bioengineering from the University of Washington in 2005. At UW, he worked in the labs of Dr. Ceci Giachelli and Dr. Buddy Ratner to apply sphere templating techniques for the development of porous fibrin scaffolds. He is currently pursuing a Ph.D. in biomedical engineering from Emory University and Georgia Tech.

In addition to using polymeric microspheres to deliver small molecules within embryoid bodies, we have developed techniques to fabricate and incorporate hydrogel microspheres within embryoid bodies for delivery of bioactive proteins. Methods to control the spatial distribution of multiple microsphere populations are being investigated in order to engineer morphogen gradients within individual embryoid bodies. Morphogen gradients are known to affect cell fate during embryo development and it is our goal to apply this knowledge to tissue engineering applications.