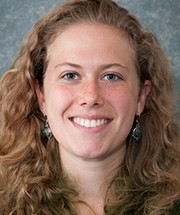 Ashley graduated from Vanderbilt University in 2014 with a Bachelors degree in Molecular and Cellular Biology and minors in Mathematics, French, and Chemistry. In her undergraduate career, she worked in the lab of Carl Johnson, PhD, studying the molecular and cellular basis circadian rhythms in cyanobacteria. Additionally she had the opportunity to work with Douglas McMahon examining the effects of postnatal photoperiods on the plasticity of neural networks. It was in the McMahon Lab that she became interested in developmental biology. Consequently in August of 2014, she became a PhD graduate student at UCSF in the Developmental and Stem Cell Program, co-mentored by Bruce Conklin and Todd McDevitt.

Cell morphogenesis is a critical focus of multiple biological fields for the advance of cell culture techniques, differentiation protocols, and the study of development. Despite this, there is little understanding of morphogenic mechanisms and coordinated multicellular organization. During early development, spatial position within an embryo plays a critical role in directing cell fate as cells undergo spatiotemporal patterning, resulting in the creation of three germ layers. Similarly, human pluripotent stem cells (hPSCs) can mimic aspects of early embryonic patterning and, when differentiated, provide a system to study spatiotemporal patterning and cell movement. My research uses the genome engineering tool CRISPR interference to develop tools that manipulate multicellular organization and direct cell fates accordingly.